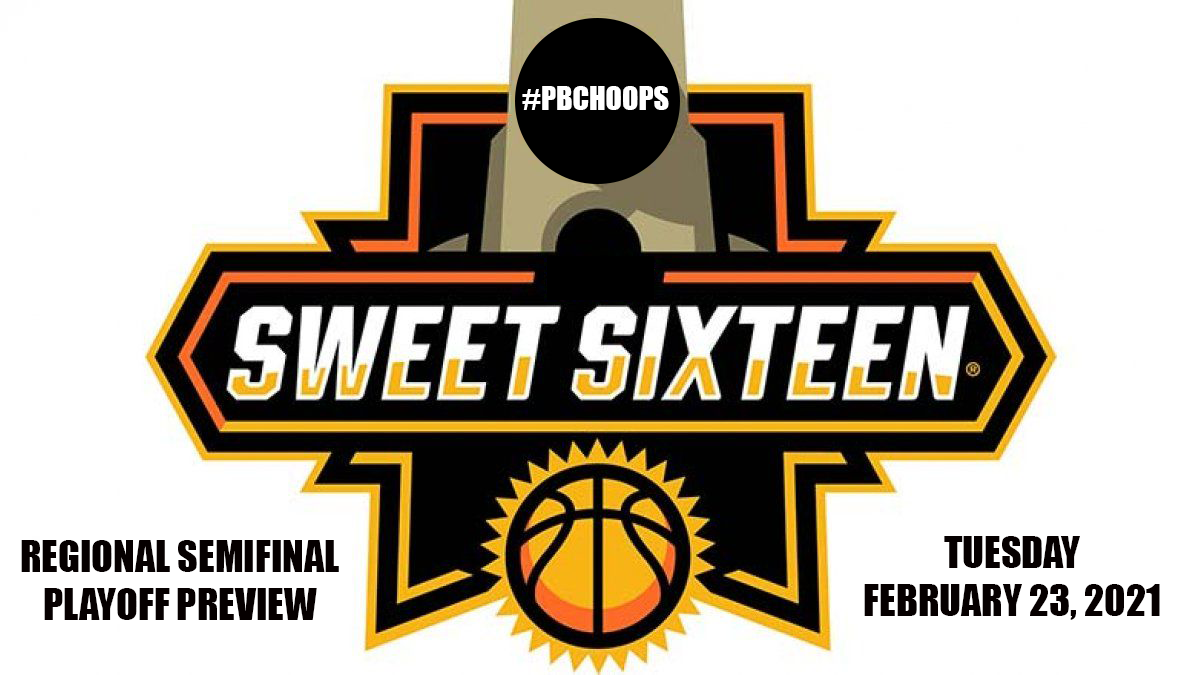 Only six #PBCHOOPS teams remain on the Road to Lakeland, all of which have won state titles in their respective program history.

In addition all six teams ended the regular season ranked in the final Public and Private Schools #PBCHOOPSTOP5 Poll:

Intriguing matchup of two teams playing extremely well at moment. Atlantic Christian has won 6 straight after starting the season 3-4. Grandview Prep ended the season #1 in the #PBCHOOPS Private School poll but has flown under the radar attracting very little attention. The winner of this game is in the driver seat on the Road to Lakeland.

Although the southern part of the 2A bracket hasn't looked as powerful as years past, Miami Christian still finds itself two wins away from a Final Four trip. In its way is Brito which has been the top team all season in 2A down souh.

Heavy weight battle of two teams that have been on a collision course since early summer. Calvary Christian is looking to head back to Lakeland for the first time since its 2017 state title. Saint Andrew's is confident and has the ace in the hole Josh Minnott. Both teams have played monster competition all season and are battle tested. This will be a highly competitive game with great talent.

Chaminade is looking for a repeat trip to Lakeland with a completely different staff this year headed by Melvin Randall. Miami Country Day started off rocky but has closed the season winning its last 5 games. Chaminade has won its last 6 games.

Archbishop Carroll picked up a big win over Westminster Christian to advance to the semifinal round. Now take on a Florida Christian squad that has been one of the top teams in South Florida all season.

Pine Crest has lost only once all season and is currently on a 14 game win streak. North Broward Prep has come a long way this season, not sure if they have enough to take down this Pine Crest powerhouse.

Rematch of the 15-4A district championship game which North Miami Beach won by 20 points.

Northwestern stumbled into the playoffs losing three of four to end the regular season but has bounced back nicely to win four in a row. Norland has won its last four games by an average margin of victory 31.5 points.

BIG TIME matchup and a rematch of last years 4-6A semifinal that Dillard won 86-72 on its way to the 6A State Championship game. This time around Martin County is undefeated and on a 20 game win streak. Both teams play smothering defense and have size. Tough call.

Another rematch from last years regional playoff. Mater Academy has won the last 5 meetings the most recent being the closest margin of victory thus far 51-44.

Wellington is looking for payback after Dwyer came from behind to win a close game last month. Now the stakes are as high as it gets with the winner one step closer from advancing to state.

Coral Springs is back in familiar territory with Devin Barta at the helm. The Colts looking to avenge 3 point loss to Monarch in the 12-7A championship game less than 2 weeks ago.

Miramar and Western looked like the teams to beat down south all season, now they face off for the chance to advance. Miramar looking strong to make a repeat trip to Lakeland.