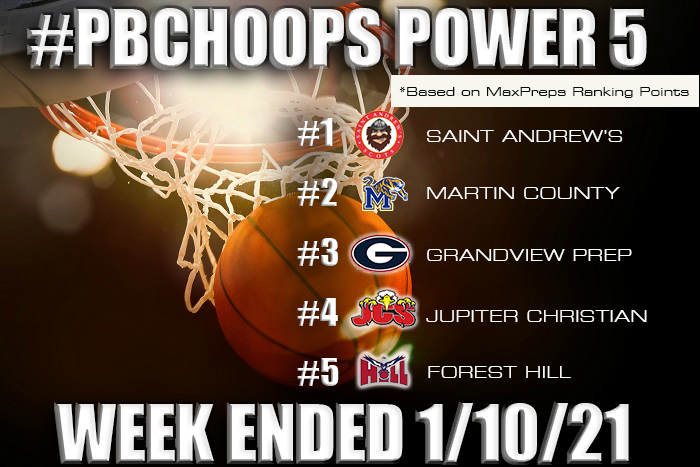 Several blockbuster matchups scheduled for last week were either cancelled or postponed due to COVID protocols, bad news indeed. The good news is that a few adjustments to schedules allowed for an even bigger set of matchups this week. Below is the first #PBCHOOPS Power 5 Poll released 1/10/21. The ranking uses the MaxPreps computer rankings and strength of schedule to rank the teams. This all computer ranking is not perfect, having 2 teams ahead of teams they lost in head to head matchups, but does reward teams for playing tough schedules. Below are all three polls (Power, Public and Private) and a preview of this week's best games:

Before jumping in comments or DMs. This is a COMPUTER poll. Computers aren't biased & don't hate/sleep on you. They use data not feelings.

Saint Andrew's had an unexpected break to start the new year due to contact tracing protocols, which caused the cancellation of a highly anticipated matched with nationally ranked Calvary Christian. The Scot's were able to lace them up Friday night, defeating Elite Academy convincingly. Saint Andrew's is #1 in the Power 5 Poll based on it's strength of schedule despite its loss to #2 Martin County.

Martin County has been beyond impressive this season and its 14-0 undefeated mark shows it. The Tigers come in at #2 in the Power 5 Poll but look to be the best team in both Martin and Palm Beach County. The Tigers are taking on all comers and looks to once again to prove they are the top team in the area as they take on Private Schools #3 Jupiter Christian and Public School #3 Forest Hill this week. This is #NODUCKINGSEASON and Martin County is on the hunt.

Grandview Prep secures the #3 spot in the Power 5 poll after a solid performance at the Kreul Classic and wins over competitive teams starting to move up the MaxPreps rankings. The Pride's two losses came in a double OT thriller to Jupiter Christian (6-1) and a seven point loss to Boyd Anderson (8-1). Grandview is a balanced squad getting contributions from all five starters each night out.

Jupiter Christian hasn't played a game since December 10, 2020, over a month, yet still their body of work has put them in the Power 5 poll. This week however, they get all the smoke as they face Power 5 #2 Martin County Tuesday and Private School #2 King's Academy Friday. In between they get Atlantic Christian on Thursday. The Eagles rankings in both polls will be put to a test this week.

Forest Hill has picked up where they left off last season and are undefeated to start year. The Falcons are smothering opponents on the defensive side of the ball and making plays offensively. Senior Donovan Draper has been outstanding thus far making plays for his team. Falcons have a tough week ahead, going on the road to face district foes Palm Beach Central and Palm Beach Lakes. Two wins sets up a battle of undefeateds Saturday at Martin County.

Jupiter Christian heads back to the court for the first time in over a month to face the areas most complete team. The Tigers junior Ryan Davis is matchup nightmare that has been unstoppable. The Eagles will need to find a way to contain Davis along with 6' 7" senior Nathan Mikkelson plus a solid stable of guards to win this game. On the flip side Martin County will need to find a way to control senior sharp shooter RJ Morris and junior big man Conner Weston. Both teams matchup well with each other which should make for a close, competitive game.

This is always a heated rivalry between the two district basketball programs out west. During the preseason Royal Palm bested Wellington in an intense game. Since then both teams have gone in opposite directions, the Wolverines are undefeated and ranked #1 while the Wildcats have struggled out the gate at 2-4. This game kicks off a big week for Royal Palm as they face the #1 and #5 teams in the #PBCHOOPS Public School rankings.

This will be a big time matchup featuring nationally ranked players Josh Minott, Amen Thompson and Ausar Thompson. The Thompson twins have returned Pine Crest back to one of the best teams in the state and have been playing at a high level. Saint Andrew's has played a tough schedule and looks to have found its stride. This will be a high level game.

Newman has been up and down so far this season at 4-4. The Crusaders looked to be turning the corner before a loss last week to North Broward Prep. The Grandview Prep front court of seniors Pedro Brown and Makye Boles have caused matchup problems for its opponents while the back court of Gunner Walters and AJ Gilles has kept the team steady providing scoring punch and defense. Look for a close one in West Palm.

These two squads have been on a collision course all season and will be a game filled with local talent. The Lions have been handling its opponents of late but take a step up in competition with a battle tested Eagles squad. Tough week for Jupiter Christian.

Olympic Heights earned its respect with last Friday nights win over then #5 Suncoast. Now Olympic Heights in the #5 spot that Royal Palm held in the preseason. The Lions have several offensive weapons led by senior Micah Octave but the Wildcats match up well with senior point guard Ryan Maxwell and 6' 7" shot blocking machine Christopher George. Points won't be easy to come by in this game as both teams compete on the defensive side of the ball.

Assuming both teams take care of business in early week matchups this could be a battle of unbeatens and bragging rights between the two neighboring counties on the line. Not much to say here other than its #NODUCKINGSEASON and glad I got my ticket.

SJPII stays at #5 despite loss to Chaminade Fri. #3 Jupiter Christian expected to get its matchup with Martin County Tue.