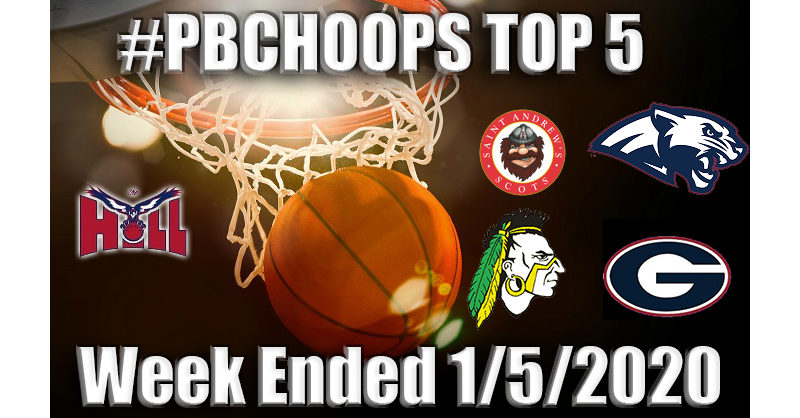 The holiday hoops break lived up to the hype and was absolutely loaded with big time match-ups. Top 5 teams went up not only against some of the best teams in South FLorida but top teams from across the country. The higher level of competition brought out the best in this weeks top 5 teams. Here's a look at the latest ranking:

#1 Forest Hill - The Falcons were busy during the holiday starting off the break at the Kreul Classic and finished at their New Year's event going 7-1 over the two weeks.

#2 Saint Andrew's - Saint Andrew's went head to head with some of top teams including an epic triple overtime battle with Boyd Anderson at the Kreul Classic. The Scot's kicked off the New Year in Jacksonville going 1-1 against 2 teams ranked in the MaxPreps top 30 for the State of Florida adding to an already tough strength of schedule.

#3 Dwyer - Dwyer has earned it's #3 ranking, going 4-1 over the break. The Panthers strength of schedule ranks up with the best in South Florida.

#4 Jupiter - Jupiter is back in the Top 5 after a short stay earlier in the season, after going 2-1 at Kelleher Firm Holiday Hoopfest in Naples it's only loss coming to state #3 ranked Santa Fe Catholic out of Lakeland. The ranking gets put to the test this week as they face Park Vista Tuesday and #3 Dwyer Friday..

#5 Grandview Prep - Grandview Prep went into the break as the Palm Beach County team with most to prove. They come out of the break haven proven they are worthy of their spot in Top 5. The break was up and down going 3-3 with big wins over Pine Crest and Wellington also tough losses to Miami Norland, Pine Crest and the First Academy. A note for Grandview, junior PG Harry Santiago will miss several weeks after suffering an ankle injury early in the loss to The First Academy Saturday.

Wellington drops out of the ranking after tough losses Westminster Academy, Sagemont and Grandview Prep over the break.

The New Year starts off with some really good matchups. Here is a look at the top games..

Wellington vs Palm Beach Lakes
This game has been circled on the calendar since the beginning of the season. A great matchup of two of the counties best programs, this is a can't miss game.

#4 Jupiter vs Park Vista
Park Vista may not be in the Top 5 anymore but a win at home against Jupiter could put them right back in. Jupiter is looking for that statement win, this could be it.

Royal Palm Beach vs #3 Dwyer
Great rivalry, the first game this season was really good. Expect the same in the rematch.

Chaminade-Madonna vs #1 Forest Hill
Rematch of one of last years best games of the season, Falcons came out on top. This year both teams are once again ranked in the top 20 in Florida. Expect another great game.

Suncoast vs Lake Worth
These teams haven't played each other in a while. Both are playing well headed into the final stretch of the season. Game will be played at the Palm Beach State College Lake Worth Campus

Palm Beach Central vs Wellington
Rivalry game between cross town rivals. Wellington has dominated as of late, Central looks to turn things around.

Loaded week of basketball to start the new year as teams prepare for the postseason.The uncertainty caused by the new criteria for postseason selection makes each game that much more important.