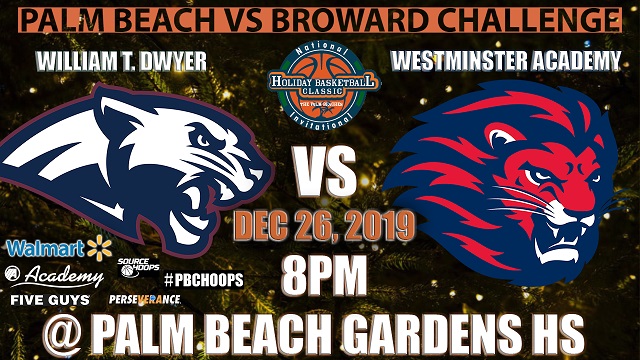 Active week as Top 5 teams finished 2-2 down south vs SoFla’s best.. Only 1 position change as Grandview, the last undefeated, moves up a spot to #4

Top 5 teams went head to head with some of the best teams in South Florida this week and proved they deserve the ranking as the counties best even in defeat. Here is a look at the latest Top 5:

#1 Saint Andrew's - Saint Andrew's was seconds away from remaining undefeated but suffered an overtime loss to Calvary Christian on Tuesday night. The Scots bounced back with two wins to end the week over North Broward Prep and Dillard which keeps them in the #1 spot.

#2 Wellington - Wellington stays in the #2 spot with a win over Miami High Saturday.

#3 Forest Hill - The Falcons suffered their first loss of the season to a big, long and talented Northeast squad. Down by double digits most of the game, Forest Hill made a furious 4th quarter comeback that fell short on a missed three with 2 seconds remaining in the game.

#4 Grandview Prep - Grandview Prep has quietly put together an undefeated season and passed its first real test Friday night against a hot Village Academy squad. This week they start the Kreul Classic with should give more insight on the team.

#5 Dwyer - Dwyer suffered its first loss of the season against a solid Miramar team. In the loss however they showed the same resilience and toughness that got them into the Top 5 making a strong 2nd half comeback after being down early in the game,

Park Vista drops out of the ranking after falling to #2 Wellington and #3 Forest Hill in consecutive weeks. Jupiter and Palm Beach Lakes just outside looking to get in.

It will be a light week due to many schools taking exams before heading to the holiday break. Here is a look at a few games to watch..

#3 Forest Hill vs Mountain Brook (AL) | KREUL CLASSIC
The Falcons schedule this season is tough, plain and simple. After facing one of the state of Florida's top team Saturday in Northeast, they now face the #3 team in Alabama and #19 in the nation Mountain Brook. The bracket also includes University School, Dillard and Wheeler (GA).

#4 Grandview Prep vs Miami Norland | KREUL CLASSIC
Grandview tips off the Kreul Classic against traditional state powerhouse Miami Norland. Other teams in the bracket include Pine Crest, Westminster Academy. Mcarthur and a couple of out of state opponents. A championship here could vault them up the rankings,

#1 St Andrew's vs Knox (NY) | KREUL CLASSIC
The Scots have shown they can play with the best of the best. This week at the Kreul the start of the tournament with The Knox School at prep school with a history of producing NBA talent including Malik Sealy (St John's/Timberwolves), Jayson Williams (St John's/Nets), Dahntay Jones (Rutgers/Pacers.Clippers). The bracket also features two top teams from Miami Dade, North Miami and Riviera Prep. Plus Boyd Anderson and Coral Springs out of Broward.

Royal Palm Beach vs #2 Wellington
Royal Palm faces another top 5 team. This cross town rivalry usually brings out the best in both teams.

Jupiter vs Lake Worth
After stumbling early Jupiter has won five straight. Lake Worth has been up and down but can be a dangerous team.

The five teams ranked are in the top 5 for a reason, not only are the playing at a high level but have also scheduled competitively. Three teams (#1 St Andrew's, #3 Forest Hill, #5 Grandview Prep) in the #PBCHOOPS Top 5 will be participating in the Kreul Classic this week, while #2 Wellington and #5 Dwyer will be participants in the 4th Annual Holiday Basketball Classic of the Palm Beaches. Competition will always be rewarded in the poll.

Another thing to look out for this week is the SourceHoops/FABC state rankings. Expect to see a few Palm Beach County teams listed.