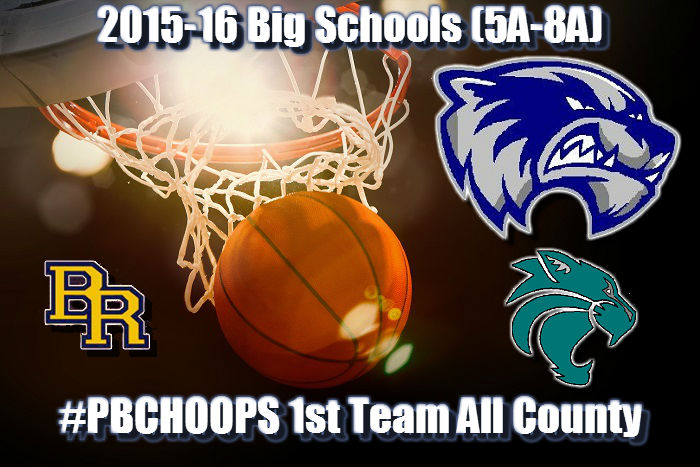 While all the focus on Wellington basketball has been on junior guard Trent Frazier, and rightfully so, the one that made them go at many times this year was Alex Dieudonne. His brute strength and power with the ball was a hard check for anyone who played the Wolverines this year. He scored over 1,000 points in his high school career and was a regular on the #PBCHOOPS 20+ and 30+ nightly scorer board, with 10 - 20+ point games and 2 - 30+ point games.

Morgan Zook was a scoring machine for the Boca Bobcats this year leading them to undefeated start of the season. Zook posed problems for defenses due to his ability to shoot the jump shot and take players of the dribble. Another fixture on the #PBCHOOPS 20+ and 30+ nightly scorer board, with 11 - 20+ point games and 1 - 30+ point game.

Jules Jasmine burst onto the recruiting radar screen last spring and summer with his performances on the travel circuit. Coming into the season alot was expected of him and his Royal Palm Beach team. They did not disappoint coming seconds away from defeating eventual 7A state champ Ely in the regional semi-final. Jules had a solid season with 9 - 20+ points games to his credit.

With partner in crime Jules Jasmine at his side, Leonard Thorpe and Royal Palm Beach were a tough match-up for every team they faced this year. His strength, ball handling ability and jump shot allowed him to be successful all season, scoring at will. This individual success also turned into team success pushing the Wildcats deep into the playoffs. Leonard season consisted of 5 - 20+ point games and 1-30+ point performance, notching a 31 point effort in a huge playoff win over St Thomas Aquinas.

Trent Frazier was the deal this year. The highly sought after south paw PG made the game look easy, leading Wellington to just a few seconds away from a return trip to Lakeland, just falling short to eventual 8A State Champ Coral Spring in the Regional Final. Trent got buckets in bunches and was one of the counties most consistent scorers finding himself on the #PBCHOOPS 20+ scorer list 10 times and the 30+ scorer list 4 more.