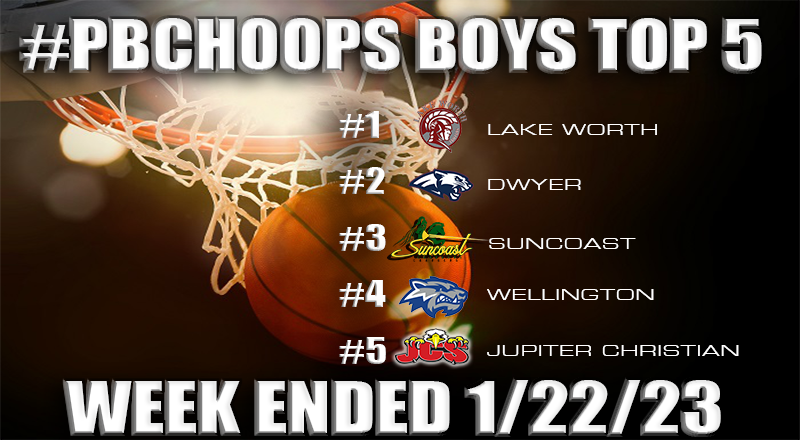 “Turn every setback into a comeback” / Kobe Bryant

A flip flop in the rankings as Wellington moves back to #4 after a Jupiter Christian loss Monday to Miami Norland. There are only 2 weeks remaining in the regular season and the closer teams get to the playoffs the more competitive the action is expected to be. Close games and buzzer beaters where the norm last week. #3 Suncoast, #2 Dwyer, King's Academy, Olympic Heights and Forest Hill all won games that went down to the last possession. The one exception is Lake Worth, the Trojans haven't had a close game this calendar year. The Trojans travel to Wellington Friday night as the Wolverines look to change that.

The Trojans had two big showdowns marked on the calendar, Thursday against state #4 overall Sagemont and Friday hosting the #6 ranked in team in 6A Lakeland. Lake Worth beat both by double digits.

The Panthers showed their resilience once again defeating defending 6A State Champion Martin County at Don Wallen Arena. Dwyer has remained perfect winning at home and grinding out close wins in tough environments on the road.

The Coast pulled out a win over Palm Beach Lakes on a Stone Bureau 3 point shot at the buzzer.

Wellington moves back to #4 and prepares for a district showdown with #1 Lake Worth at home Friday.

The Eagles drop a spot after splitting a pair of games this week, falling to state power Miami Norland Monday night before bouncing back Friday in a big win over Cardinal Newman.

Benjamin looks to reverse fortunes against a Westminster Academy that has gotten the best of them over the last several years.

Olympic Heights has been a tough opponent all season. Now they look to stop a Cougars squad that is on a roll winning 10 of its last 11 games.

After a start of the season that didn't see much competition the Lions are hitting the meat of their schedule with several matchups against teams with strong strength of schedules. King's bounced back nicely after suffering its first loss of the season to Lakes. Saint John Paul II has been battling all season and looks to prepare itself for another difficult playoff run.

Inlet Grove puts its undefeated season on the line against one of the biggest and most talented teams in Palm Beach County. Jupiter Christian has been playing at a high level thus far. This will be a matchup of different styles, Inlet wants to push the pace and get its shooters opportunities. Jupiter Christian is going grind it out, forcing its opponent to make the right play each time down. Expect a chess match between two coaches that know each other well. Inlet Grove head coach Christopher Brooks was on Jupiter Christian Head Coach Tavarus Harris staff at Cardinal Newman for several years.

After a rough start Forest Hill has won 4 in a row, they head north to face a Treasure Coast team that is a favorite to win a district title.

Round two. Dwyer won the first round, both teams are hot at the moment. Dwyer is still undefeated 18-0 while Suncoast has won its last 10 games. Prime Time Wednesday night matchup that should bring tons of college coaches out to Riviera Beach once again.

John I Leonard vs #1 Lake Worth

John I takes a step up in competition and will try to slow down the Lake Worth machine. This could be a potential district matchup a few weeks from now.

Match-up of two teams going in opposite directions. Lakes has won 4 of its last 5 while Park Vista comes into the game on a 4 game losing streak.

#1 Lake Worth vs #4 Wellington

Wellington is the last Palm Beach County team to defeat Lake Worth. That in itself makes this a must see event.

That's it for this week. Click here for this weeks schedule of games http://pbchoops.com/pbchoops2/week_schedule_mobile