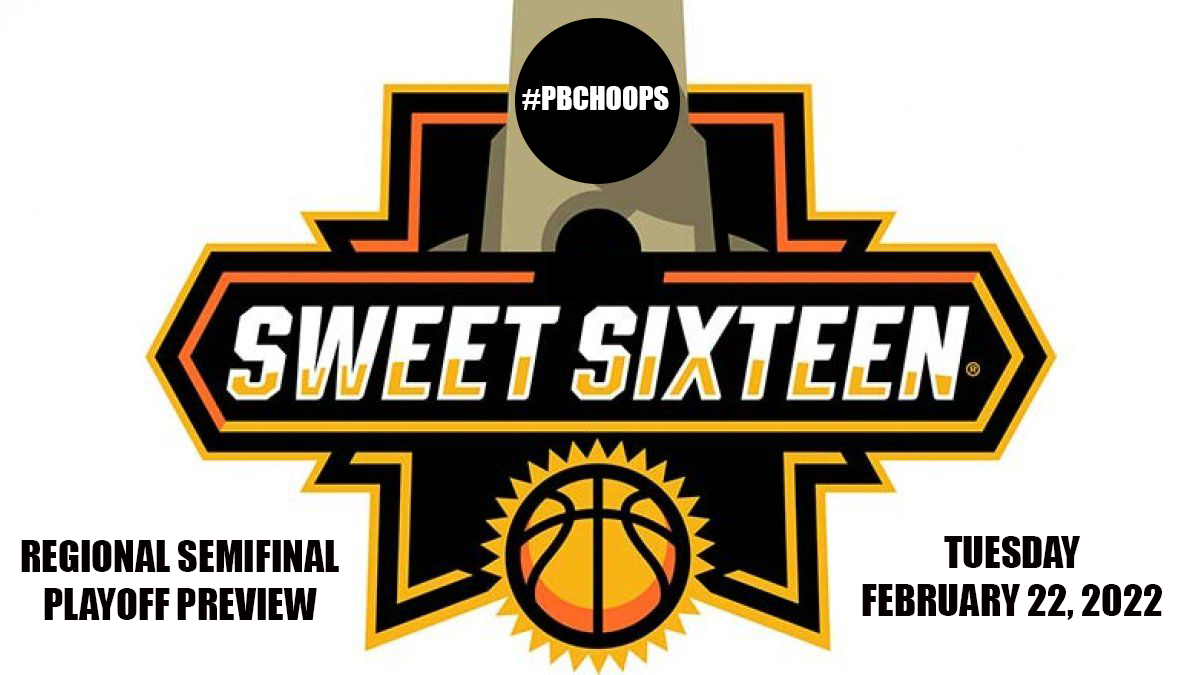 There are still eight #PBCHOOPS teams remaining on the Road to Lakeland, only three of them ended ranked in the final #PBCHOOPS Top 5 poll of the regular season on February 6, 2022. Lake Worth Christian is one of the big surprises still alive along with Saint John Paul II and Cardinal Newman under new coach Andre Torres. The group also includes familiar names this time of year Dwyer, Martin County, Wellington, Forest Hill and Lake Worth.

We now move to the Regional Sweet 16 tournament, here's a breakdown of the regions for all South Florida teams including predictions from master prognosticator RMF Magazine co-founder Jean-Camille Dubuisson and long time #PBCHOOPS contributor Derrick Franklin.

Click this link to view all State Series Brackets and results

Lake Worth is 2-0 against Forest Hill so far this season winning both games by a total of 46 points. If the Falcons have any chance to keep this game close they will need to figure out how to contain the Lake Worth dynamic duo of Calvin "Bobo" Sirmans and Marvin "Merv" Golf. Both torched the Falcons in their two meetings, Golf went for 32 points on January 21st and Sirmans 31 points in the district semifinal win on February 9th. In addition the Falcons will need to find points from players other than seniors Mike Cooper and Brayser Martinez, Cooper is averaging 18.33 points per game in the playoffs and Martinez 17 points per game in Falcons two playoff wins. Tough match-up for Forest Hill.

Wellington dominated the first meeting on December 21st winning 70-33 at the Vero Beach Holiday Hoopla event. The Kowboys are 11-2 in the new year with the only losses coming to powerhouse Oak Ridge and 21-7 Winter Haven. How much can be taken from the first meeting remains to be seen but the Wolverines are 3-0 in the playoffs and senior Brendan Williams is getting hot at the right time averaging 17 points per game in the postseason. Wellington will be on the road headed to central Florida for this one and a win puts them one step closer to returning to Lakeland.

Columbus has been playing on a high level all season and has one both games against Miami High by an average of 19.5 points.

This should be a highly competitive and intense game. Both teams are filled with talent and great coaching on the sideline.

Pines Charter won the first meeting by 20 points and has been on a roll, the Raiders will need to be sharp to come out with a victory.

These two heavyweights have been on a collision course all season, splitting the first two meeting with both games on Dwyer's home floor. The Panthers came out on top in Game 1 winning 74-69, balance scoring was the key with four players in double figures led by 2023 Kyle McNeal's 22 points. The Tigers took the district championship in Game 2 49-48 without sophomore sensation Elijah Duval on the court. Whether or not Duval plays in Game 3 remains to be seen but Martin County has continued to win behind senior Ryan Davis who is averaging 15.8 points per game in the playoffs. The Tigers have proven they can win big games with or without their top players having already won games this season without Davis and Duval, seniors Braydin Samuels and Jayden Pressey have been big and could be the X Factor for Martin County. For Dwyer senior Juwan Dawes and c/o 2023 junior sharp shooter Blake Wilson have stepped up averaging 17 points and 22 points per game respectively in two playoff wins. The key however for both teams will come down to defense and which team can impose its will on the other, if Dwyer can keep its recipe for balance scoring and lock down defense they have a good chance to go into Martin County and snatch a victory. On the flip side if Martin County can control the tempo, the Tigers could be back in the regional final.

Belen is peaking at the right time and is on a 9 game win streak. Stranahan has won 9 of its last 10.

A rematch from one of the most highly anticipated games of the season. Calvary won the first matchup in a close one 51-49, this time around it's Win or Go Home.

Expect a close one down in Miami with two evenly matched teams.

The Crusaders are a dangerous team and one others in Region 3 were hoping wouldn't be in the position they are now, two wins away from a trip to State. Holy Trinity surprised many with a win over Jupiter Christian in the regional quarterfinal to earn the right to host the #8 Crusaders. Newman's recipe for success this post season has included not only junior wing Marouf Moumine but seniors Jarard Mosely and Kevin Eutsey. All three provide great size and balance which makes for a tough match-up for any opponent they face. Holy Trinity was led Thursday night by dynamic 8th grade prospect Caleb Gaskins 19 points and senior Theo Mansill. The Crusaders should have the edge in experience and depth, they will need to exploit those advantages to move on to the regional final.

Saint John Paul II is led by junior Kyle Edison who is averaging 16 points and 9.3 rebounds in three playoffs wins. Edison is a high motor player and impacts the game on both ends of the floor. The Eagles will need their junior leader to continue his solid play as they welcome a Santa Fe Catholic team that defeated Saint Andrew's by double digits on Thursday night, winning 7 of their last 8 games. The Hawks senior guard Trey Lane has been on a tear averaging 25.5 points per game in his last 10 games. Saint John Paul II will need to find a way to contain Lane if they are to advance one step closer to Lakeland.

Westminster Academy is highly talented and put together a great season thus far, Florida Christian can light it up and will need that scoring to match the Lions high powered offense.

An underrated game on a busy night of hoops, this should be a good one.

Lake Worth Christian has been proving the doubters wrong this post season and won 12 straight games including a 61-52 victory over Highlands Christian Thursday night. Freshman Landon Harwood went for 25 points in the win and now must travel to Weston to face the #18 ranked team in state, Sagemont. The Lions are loaded and senior guard Adrian Cruz is having a monster year. Lake Worth Christian will get a real step up in competition, a great opportunity for this up and coming squad.

True North won the first game 56-53. Miami Christian looks to have found its stride of late winning its last 4.