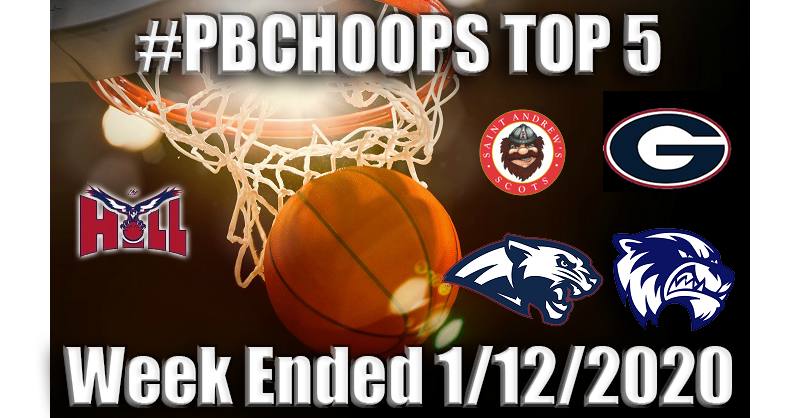 The top 3 teams in the rankings have combined for a total of 9 losses. Although, none of the losses at the hands another Palm Beach County team. Here's a look at this weeks Top 5:

#1 Forest Hill - Forest Hill picked up one of it's better wins of the year going down to Broward and beating a talented Chaminade-Madonna team. The Falcons followed up the with wins over Boynton Beach and Palm Beach Gardens to finish the week 3-0.

#2 Saint Andrew's - The Scot's tough schedule continued this week going 2-1 falling to a talented Gulliver Prep yet still stay in the #2 based on its body of work so far.

#3 Grandview Prep - Grandview picked up two big wins over North Broward Prep on the road and Atlantic Christian at home.

#4 Dwyer - The Panthers ran into a hot and improving Royal Palm squad in overtime Tuesday night but bounced back with a win over then #4 Jupiter Friday night.

#5 Wellington - Wolverines went on the road and beat Lakes Tuesday night in a highly anticipated matchup and followed that up with another win against cross-town Palm Beach Central to get back into the Top 5.

Park Vista seems to be getting hot at the right time playing its best basketball against better competition and could be looking to get back in the poll.

Only a few weeks left in the regular season as teams prepare for a run in the playoffs. Here is a look at the top games..

Jupiter vs #5 Wellington
Jupiter's stay in the ranking was short once again as they suffer back to back losses last week. Things don't get easier Tuesday night as they head to Wellington, a program they haven't beaten since December 20, 2013 going 0-15 since.

Palm Beach Lakes vs #1 Forest Hill
Last year's game was the game of the year with both teams coming undefeated ranked #1 and #2. This time around Forest Hill is the #1 team and Lakes is starting to come together. Expect another great game.

#4 Dwyer vs Martin County
Martin County is 12-2 on the season and welcomes a young yet battle tested Dwyer team for what should be one of the best games of the night.

Boca Raton vs Park Vista
A big week for Boca High as they two Top 5 teams and the next best team back to back to back.

#5 Wellington vs Boca Raton
Win or lose Tuesday night against Park Vista the Bobcats will need to be ready for another test.

#3 Grandview Prep vs Boca Raton
Battle of Boca. The Bobcats look to make a statement with a win and both teams compete for bragging rights in the city.

Palm Beach Lakes vs #4 Dwyer
Round 2. Dwyer took care of business the first time around. Lakes is playing much better and looks to secure a big win against its rival.

There will also be several key matchups as teams travel close and far for the Martin Luther King Jr holiday weekend. Several events across the state.

Check out our master schedule http://pbchoops.com/pbchoops/week_schedule