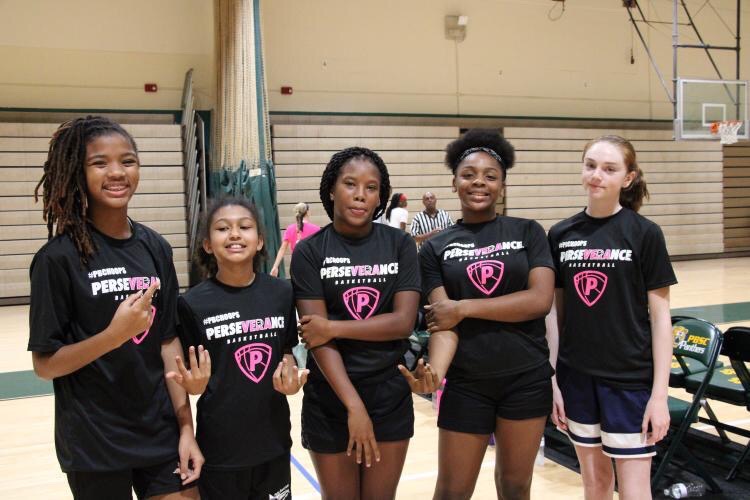 After our first girls Middle School event #PBCHOOPS "Step Up" in February we were very eager to get our eyes on some of the prospects who came back giving us a chance to monitor their progress. While a new crop of players were in the gym for a first look in an effort to "End the Summer Right"

Here is a look at the standouts from the day::

Aylana had a great all around performance both offensively and defensively. In our first look in February at "Step Up" she displayed the ability to defend, Saturday she did the same and also played more assertive with a better motor showing plenty of confidence. Our top performer on the day.

Alexandra was a real problem for the opposition during game play as she over powered with her size and soft touch around the basket. Defensively she rebounded her area and altered shots. At the middle school level there will be few players in Palm Beach County who will be able to match her in the paint. Alexandra also showed an improvement in shooting from our first look at "Step Up". A top prospect at the event.

Zuri could have the brightest upside of the girls in the middle school division, long, athletic and has only scratched the surface of the type of player she can be as she finishes middle school into high school. Zuri does several things well but has not developed an elite skill yet. We will monitor her development closely and is the type of player who can explode onto the seen quickly. A definite player to watch.

Courtney was one of the better shooters at the event in the middle school division. She showed the ability to knock down shots as she did back in February. One area she did improve on was her defensive effort from "Step Up", definitely more engaged and willing to defend. While the improvement showed we feel there is still even more there as she has the ability to be a solid defensive guard.

Selma was another of the #PBCHOOPS "Step Up" attendees in February. All the things she did well six months ago she continued to display Saturday. Solid post up game and used her size effectively on both offense and defense. We would like to see continued work on shot mechanics which will allow her to extend her range on her jump shot making her even more effective. Good Upside!!!!

One of only three c/o 2025 7th graders at the event, Abby more than held her own in game play and displayed a very strong skill set during the drills session. Abby has a great feel for the game and displays a high basketball IQ along with her ability to shoot the basketball. Gritty player that stands only 5' 5" now but is projected to finish at about 6'. Abby has made significant strides since when we last here in February at "Step Up".

Daria is very raw but plays with great passion and a high motor. She showed great toughness playing back to back games first in the middle school division and next against a very talented group of high schoolers. Better shot selection and more focus on skill development will be needed as she advances through the levels. She will be a prospect we watch closely into high school.

We were very impressed overall with the quality of players at the Middle School Summer Showcase and encourage all to continue to work. We look forward to seeing them again at future events. Make sure to check back later this week for a wrap up from the Girls High School division and the Boys "Welcome to the Show" c/o 2023 event.