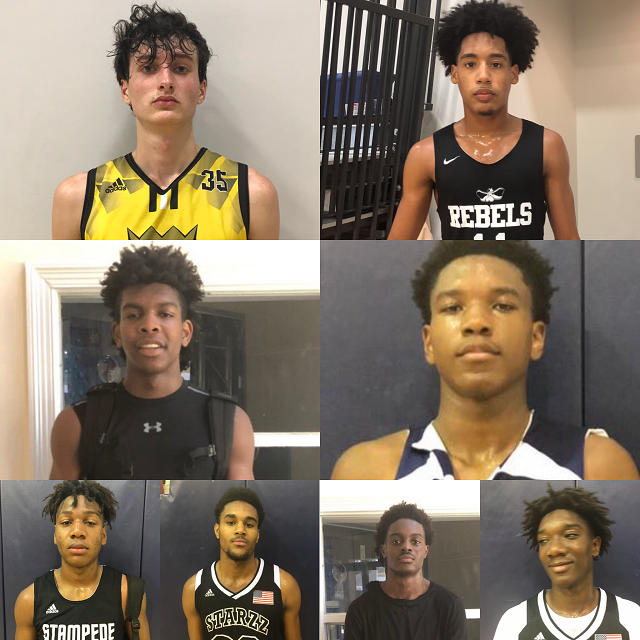 The #PBCHOOPS Summer Championship was a highly competitive showcase that featured some of the areas best local players on one court. The field of 13 teams put on a show for all in attendance, which made for a great basketball in environment. The goal of the event was to display as much talent as possible in from of local college coaches and media, in the end we exceeded expectation.

Here are our Top Performers and Highlight Performers for 17U Division:

Caleb proved to be the best scorer in a event loaded with guys who could fill u the score sheet. Muller is a 6' 4" shooter showed he could get things going quickly even after a slow start. Sunday in one of the last games of the day Caleb missed his first 3 shots before knocking down 6 3-pointers on the way to 31 points and the win over Team Original. Muller was also the overall scoring leader for the event averaging 28.5 points per game and led the tournament in 3-point shots made with 9.

Lacount is the real deal, a top rate scorer that can put the ball in the basket a variety of ways. He finished the event as the leader in total points and capped it off with his first offer from Lynn University.

Kemari set the tone for the event when he opened up play with a spectacular 32 point performance in a win over the Florida Hornets. Brown is a solid built 6' 4" guard that can handle ball, shoot and has elite vision, all of which were on display on the weekend. KJ also hit a game winner Sunday playing with the Delray Blazers to seal a victory over the Jupiter Jaguars. Both Lynn University and Palm Beach Atlantic University were in the gym, Lynn has identified KJ as priority recruit. Presbyterian University is also heavily in the mix along with several other D1 and D2 programs.

Johnson has absolutely exploded in July. After a strong live period performance with Team Breakdown in Atlanta, he backed that up finishing the Summer Championship as the 2nd leading scorer averaging 21.7 points per game including dropping 28 points in win over the Florida Hornets. Jordan's game has taken off these last few months and is playing with supreme confidence on the offensive end.

The 6' 7" wing has shown steady improvement year after year developing into a solid 3 who can put the ball on the floor and knock down shots from the perimeter. On the defensive end he's a shot eraser and gobbles up rebounds at a high rate. George led the Starzz to a 1-1 record and averaged 21.5 points per game for the event.

Shane was in attack mode from the jump taking any and every defender the rack anytime he could. When the drive wasn't available he showed the ability to hit perimeter shots. Allen plays with a high motor and is not afraid to mix it up on both offense and defense.

Ratlieff was a new name that showed he is ready for primetime. The 5' 11" guard is quick and strong, showing a great ability to score the basketball. Another high motor kid that play hard on both ends.

Feldman is the poster child for not judging a book by it's cover. The 5' 10" PG is TOUGH (yes ALL CAPS) who knows how to run his team and is able to create space in the lane to finish or create for teammates. Kyle averaged 19 points and accounted for numerous assists for his team.

A big body that plays bigger than his advertised 6' 6" height. Jaquan is very physical in the paint with a nice feel around the basket and looks to dunk everything. Gatling has all the tools and if he can put them all together we can expect a very good high school season from him.

VeDan is a good athlete that has the fastest motor on a Team Original squad full of players that played hard every minute on the court. Cowan showed he can knock down the 3-ball consistently or finish in the paint. We would like to see him develop a mid range game and go to it plenty and often. With that added piece Cowan will be a name to watch.

Williams is an intriguing prospect, standing 6' 4" with long arms he has a versatile game for his age. I've seen Ken several times over the past couple years and each time he plays hard, has good handle and shown the ability to knock down shots. At times however he's shown to let his emotions get the best of him on the court, if he can get that under control Williams will be a player to watch closes these next 3 years.

Cedric Louis is the definition of attack mode. He spent the entirety of the weekend being aggressive on the offensive side of the ball, trying to finish on or over anyone at the rim whenever possible. The 6' 4" Louis ended the Summer Championship averaging 15.33 points per game. A definite player for various levels of college coaches to watch this upcoming high school season.

6' 3" Very bouncy, plays above the rim. Can knock down shots.

6' Knock down shooter, hit 7 3 pointers on the weekend.

Finished 2nd for the event with 8 total 3 pointers made.

The lefty is a natural scorer with nice bounce, had it going on Sunday.

Part of an extremely tough guard group for the Jaguars, does all the little things.

Benathi is a well built 6' 1" guard with a nice feel for the game that had a breakout weekend averaging 15.33 points per game.